The Private Investigator has always been portrayed in the cinema as a charismatic dark, sometimes sinister figure and in the media as a 16 year old cyberpunk cracking foreign intelligence codes and now, of course, as a criminally minded social intruder and phone hacker.
Many see PI’s as a civilian spy, a one-man band trying to make a meagre living from day-to-day routine enquiries waiting in anticipation of the ‘big job’.
So what exactly is a private investigator? The ex-police officer serving papers from the court in divorce proceedings? The retired person whose sense of curiosity and justice stirs them into action? Or the slick, quick, industrial-espionage specialist who continually tries to foil and outwit unscrupulous business people who are bent on financial and political power? Or the PI working for them to bring power by information at any price?
The truth of it is that all of the above and many other definitions fit into the world of the modern day Sherlock Holmes. The type of work carried out by investigators is as diverse as the people who take up the profession. As well as the usual, widely accepted and well-known matrimonial and divorce work, the modern investigator can be called upon to act as a professional witness, involved in gathering evidence to support legal applications put before the court. Sometimes the PI will be called upon to work in criminal investigations to help prove a theft or some other crime, and to gather evidence to be given to the police as part of a court case being presented before a judge or passed to a journalist to expose a wrong-doing. On the other hand, the PI may have to work for the defence of a suspected criminal, meticulously sifting through the evidence and challenging any inconsistencies or locating and interviewing possible defence witnesses.
I’ve worked as an investigator for more than 30 years and I have been called upon to carry out investigations to locate and prove that firms or individuals are manufacturing or supplying goods without the license-holder’s consent. Retail and manufacturing companies have used the skills I learned as a soldier to work undercover or to carry out covert surveillance, gathering information to determine how their employees operate out of site of management, to identify individuals or teams involved in theft, using company equipment without consent or selling intellectual intelligence and testing the company’s security and systems. I have been deployed overseas working undercover to expose Letter-of-Credit fraud, child abduction and protection. I’ve lived in attics, under garden sheds, in disused properties, even in drains gathering video evidence to show that a claimant – although saying that he/she is unable to work – is in fact fit and healthy. I’ve met with Special Branch and handed information over to uncover future terrorists leaving the UK for training abroad.
I would argue that society will always have the need for information and in most cases the needy will not really care how that information was gained. 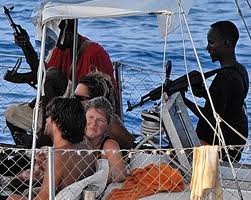 Defining piracy seems at first glance to be a simple process but for the sake of intelligence gathering a more precise definition is needed especially when the information received could lead to the deployment of special operations groups to an area where in fact there has not been a properly defined recordable incident, leaving dangerous areas without adequate cover. The problem, of course, is one of the master’s experience and recent knowledge and analysis.

It is easy to make a mistake and to believe, and consequently, report an ‘incident’ when in fact the observed action was not what it first appeared to be. Large numbers of legitimate fishing vessels operate in the Southern Red Sea and many of these fishing vessels approach merchant ships either to improve their fishing or to warn ships away from their nets.

Keeping up to date with local intelligence is the best way to avoid unnecessary panic. Knowledge, as they say, dispels fear. Knowing that in the northern Somali Basin the preferred mother ships are usually local dhows and that in the southern Somali Basin the use of 8 metre whalers are used does give the master a definite advantage. Obviously these are not hard and fast rules and that is exactly why quantified and qualified regular information is needed to inform the intelligence services, such as United Kingdom Marine Trade Operations (UK MTO) who in turn will publish Best Management Practices (BMP) ensuring that everyone can benefit and contribute to everyone’s safety.
Piracy Definitions are set out in BMP 4 and in essence defining what is a Piracy attack and what is deemed to be a suspicious activity:

‘A piracy attack may include, (but is not limited to), actions such as the following:

• The use of violence against the ship or its personnel, or any attempt to use violence.
• Attempt(s) to board the vessel where the Master suspects the persons are pirates.
• An actual boarding whether successful in gaining control of the vessel or not.
• Attempts to overcome the Ship Protection Measures by the use of ladders, grappling hooks or weapons deliberately used against or at the vessel.Pirate Attack – is where a vessel has been subjected to an aggressive approach by a pirate craft, AND weapons have been discharged.Hijack – is where pirates having boarded and taken control of a vessel against the crews will.

Illegal Boarding – is where pirates have boarded a vessel but HAVE NOT taken control. Command remains with the Master. An obvious example of this is the Citadel scenario.

Suspicious or Aggressive Approach – includes action taken by another craft which may be deemed suspicious if any of the following occur (the list is not exhaustive):

• A definite course alteration towards the craft associated with a rapid increase in speed, by the suspected craft, which cannot be accounted for as normal activity in the circumstances prevailing in the area.
• Small craft sailing on the same course and speed for an uncommon period and distance, not in keeping with normal fishing, or other circumstances prevailing in the area.
• Sudden changes in course towards the vessel and aggressive behaviour.

In helping to evaluate suspicious activity, the following may be of assistance to determine the nature of a suspect vessel:
• The number of crew on board relative to its size.
• The Closest Point of Approach (CPA).
• The existence of unusual and non-fishing equipment, e.g. ladders, climbing hooks or large amounts of fuel on board.
• If the craft is armed in excess of the level commonly experienced in the area.
• If weapons are fired in the air.’

For the sake of completeness the following UK MTO advice is recommended:

‘Prudent and timely application of BMP can make the important difference of being approached, attacked, or being pirated. If any incident occurs, Masters are requested to report immediately to UKMTO via telephone and provide the details of the incident. This will ensure the information is provided to other ships in the area for their awareness and vigilance. If Masters are safely able to take pictures and/or video of the suspicious activity, please provide these via email to UKMTO (ukmto@eim.ae), the NATO Shipping Centre (info@shipping.nato.int) and MSCHOA (postmaster@mschoa.org).’

‘Vessels are strongly encouraged to report any suspicious sightings or aggressive approaches to UKMTO via telephone (+971 505 523 215). This will allow maximum opportunity for appropriate advice and assistance. Vessels are asked to follow this up with an email report and any photographs available as soon as possible after the incident.’

Stepping Out In Nigeria…

Best known for its 419 international criminal scams, you know, the ones that start ‘Hello my friend, God be with you and keep you safe I am Sani Saro-Wiwa and need your bank details so I can give you billions of dollars..’ usually, at best, ending up with a clean out of your bank and at worse you take up the invitation to visit the capital and come home in a body bag!
Nigeria sits in the West of Africa with its coastal feet soaking in the Atlantic Ocean’s Gulf of Guinea. Generally in the south you’ll find the Christians and in the north the Muslims.
If you are really lucky, in the North East, you’ll share a banana or two with Mohammed Yusuf leader of Boko Haram, a terrorist jihad Islamic sect dedicated to ousting the infidels, as you wait for your ransom money to be paid or better still a failed attempt to rescue you. Fun or what!
Boko Haram translates to ‘western education is sacrilege or a sin’, Yusuf founded the movement in late 2001and in 2011it was responsible for 450 killings.
Violence isn’t restricted to Boko Haram, the Country is full of it from clashes between Muslims and Christians near Lake Chad to the lawless capital Lagos where you can join in with the daily muggings, car-jacking’s, robberies, assaults and murdering of any unsuspecting foreigner who just happens to be around, broad daylight or black of night, it doesn’t make any difference. Don’t bother telling the uniformed police or soldiers as many of them are responsible for murdering just for the fun of it, what a hoot!
As well as the 419 accolade Nigeria boasts one of the highest crime rates in the world with around 100 murders and 1300 thefts for every 100,000 people. Organised crime spreads across Europe where drug dealing, counterfeiting and credit card fraud are the norm. Just ask the Germans, it seems the Nigerians really like Germany.
Out and About:
You can walk of course, or try the dilapidated railway, but you’d miss the excitement of driving around the long-distance roads built in the 70’s by the world’s richest oil companies where accidents are commonplace, who would miss this? Not to mention the dangers posed by unauthorised checkpoints staffed by armed bandits, police and the military with the sole purpose of making money either by robbing or kidnapping you. If you are up for a smack on the nose, punch in the mouth or club on the head try to engage in these activities in one of the cities and have access to lots of dollars as the Health System is limited to cities and costs an arm and a leg (you can of course donate these for sale if you are down on your financial luck). Government and International Aid money earmarked to improve the population’s health is usually spent in the Prada Arcade at the Galleria Vittorio Emanuele ll, Milan or deposited in a Government leader’s personal account in the Deutsche Bank Frankfurt.
As a leaving present you could come home with a dose of meningitis, cholera, measles or gastroenteritis. So prolific are these that the Saudi’s once banned all Nigerians from entering the Kingdom and visiting the Islamic world’s holiest shrines.
What Joy!
For more information on this and many other worthwhile places to visit in the world why not attend one of the author’s regular personal and corporate safety courses designed to lessen the possibility of a corporate manslaughter charge if your employees are sent away without basic safety knowledge.